A Persistence of Faith

This accompanier report was written by Jeff Hornbeck. Jeff and his accompaniment partner, Steve Minnema, are serving as Accompaniers in Urabá in March 2019.

To visit rural Colombia towns like El Tres as accompaniers is to learn to accept the evolving unfamiliar in many ways. Our guest quarters—a quiet country abode at night—revealed itself in the morning to be a bustling free range farmhouse complete with the predawn dueling of rooster and turkey (edge to persistence of turkey). It was also a step up as a hot, sweaty, and dusty destination, because this tropical banana-growing subregion of Urabá is suffering from an unusually hot summer and drought. So given these challenges to sleeping, it was just as well we spent the early evening in a Presbyterian service at a nearby house church. And for a moment we enjoyed the cooling stiff night’s breeze as we clamored down the bumpy dirt roads on the back of small, underpowered “motos.” 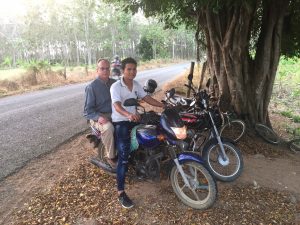 The two-hour service was also unfamiliar to us, but its newness and punctuated musical rhythms conveyed the enduring faith of a hard pressed people. In El Tres, the majority of congregants, displaced by Colombia’s years of internal violence, are literally an exodus people. Driven from their land by well-trained, armed paramilitaries, they live simply, relate freely their storied difficult past, but refuse to accept themselves as victims. Despite losing everything, they are, you see, blessed. Blessed to have been delivered to a place of relative peace and blessed to be able to start over when thousands of others faced a far worse fate. In fact, before we can squeak out a Buenos Días, they bless us with a heartfelt “Te Bendiga,” because our mere presence has now made us part of their community. 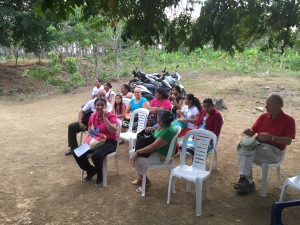 A culto (worship service) in El Tres, a community in Urabá

This is the “new normal” for us now and it offers an invitation to live anew. It is an invitation to put aside the daily adjustments we face as we witness the divine working in ways we can’t fathom from our own experience. It is an invitation to accept an emerging clarity that despite the many differences in how we approach daily life, worship, and even our past, we are here to share in a deeper sense of God’s intention for community. It is a deepening invitation to simply be and share in a transformative life modeled by Jesus and meant for us all.

Such a faith requires a holy persistence, like that which drives the Colombian people to insist on peace as the only option. The plea: don’t give up on the peace negotiations, or on fully implementing the peace accords, or on the peace of Christ that binds it all. This is also the stated mission of the Presbytery of Urabá, to provide “una chispa,” a spark of hope for a peaceful life. Violence has failed Colombia for generations. The Colombian people know they must stay the course of peace, which is another way of saying, they have the courage to stay the course of love, even after suffering at the hands of those who rejected it.