Agua Prieta: Seeing asylum-seekers as the unique people they are 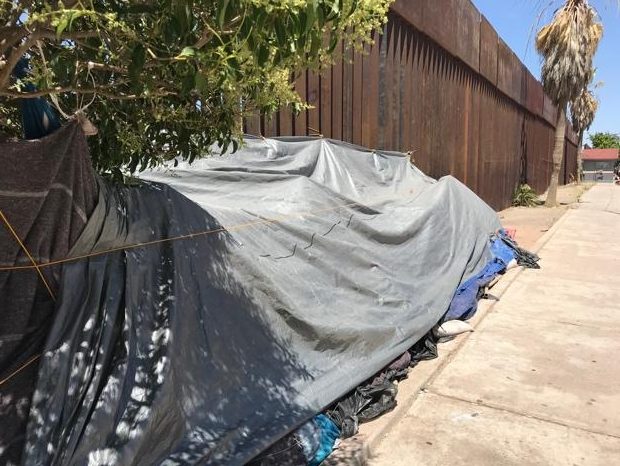 Tent alongside the border wall where migrants wait in “la linea.”

What a difference a shower can make! After a long day in the heat of Agua Prieta, the blast of cool water is wonderful and, as I wash away the dust and sweat, I feel human again.

So much of what asylum seekers experience is dehumanizing.  Even under the care of CAME asylum seekers have little control over their daily routine, especially once they are waiting in la línea outside the official port of entry to Douglas, Arizona. The conditions in la línea under the makeshift tarps and plastic are cramped and stuffy and there’s no privacy. Folks waiting there can use the bathrooms at the Migrant Resource Center once in the morning and once in the late afternoon and must wait for volunteers to escort them there and back.  Accompanying migrants from la línea to the CRM where they can take a shower is a small way can help them “feel human again.”

Labels used by President Trump and others to describe asylum seekers further dehumanize them. And in the U.S. mainstream press, asylum seekers are often referred to an a way that suggests they are a homogenous group. We lose sight of the individuals and their unique stories.

For example, there’s the young couple from Kyrgyzstan. She was completing her training as an ophthalmologist and he was completing his as a general surgeon when they sold everything and left behind their families because they feared the actions of governmental authorities. They are expecting a baby in just a few months. The mother-to-be is suffering from low blood pressure and so her husband is going to wait in la línea without her so she can stay in the shelter’s more comfortable surroundings. Twice my partner Bill and I brought other asylum seekers to the doctor for his advice about their medical problems and he treated them graciously and with care.  Any hospital in the U.S. would be lucky to have him on their staff.

Then there’s the family from southern Mexico who fled the farm where their main crops had been corn, green beans, and watermelon. The cartel took over their farmland to grow coca and marijuana and the family was told they’d be killed if they didn’t cooperate.  It was clear that the cartel meant business. Some of their neighbors had already been “disappeared.” The mother, father, and three young boys fled north, leaving behind the home and land that had been in their family for generations. The husband and wife are natural leaders, encouraging their fellow asylum seekers to help keep the Center clean and to engineer the shelter at the line to be more rain-proof.  The boys are full of energy and mischief and eager to practice English. This is a family that will thrive in the U.S. if given the opportunity.

As I take a cool shower this evening in Tucson, I will think of the families and individuals – from Honduras, Argentina, Ukraine, Russia, and the Mexican states of Oaxaca, Guerrero, Michoacán,  – who have crossed into the U.S. during my stay in Agua Prieta. I pray that they are being treated humanely as they apply for asylum.