No rain for the entire month we were in Urabá! (Northwestern Colombia). We had been prepared for almost daily deluges because Weather.com had predicted them. We expected jungle but found dry riverbeds and municipalities that had no water to send through pipes to homes. How could Weather.com have been so wrong?

On an accompaniment experience like ours in Colombia reality turned out to be different from our imagination, early research, briefings and first impressions. As we reflect on our time in the small city of Apartadó, Colombia with the Presbytery of Urabá, we realized that much of what we thought we knew was just wrong. Our experiences changed these misconceptions. 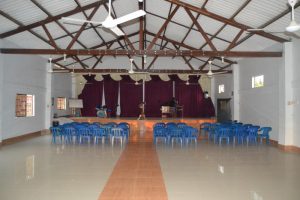 If you’ve ever participated in an experiential educational program you’ve heard the question, “What surprised you?” It’s one of our favorite debriefing questions because it often leads to the reflection and research that true growth is all about. So here is a brief list of some of the surprises, large and small, that we encountered during our month in Urabá Presbytery. We have also added our reflections on what these surprises might mean in terms of Christian witness.

Our most important finding is that the Presbyterian Church of Colombia (IPC) has a great deal to teach us about Christian Peacemaking. The Message of Love and Light is not overcome in the face of violence. The IPC has been a voice of advocacy for peace for so long that Presbyterians have seats on the Commission for Peace and Justice in Colombia and have key voices in efforts to reduce violence. The IPC is the single denomination in Colombia that is a member of the World Council of Churches.

Peace progress that happened while we were in Colombia:

Members of the Presbyterian Church of Colombia and the World Council of Churches (South American Region) met with President Santos of Colombia in Cartagena at the end of February. They reminded him of Jesus’ mandate to love your enemies. They signed an agreement advancing peace.
We met with former FARC leaders in their reintegration camp

Why is it so important that the Presbyterian Church of Colombia is a consistent voice calling for peace? We observed:

Most community residents are displaced persons resulting from 30+ years of violence. Entire congregations, even towns are made up of people who were displaced from their farms because of the decades of violence. Many lost family members – fathers, sons, brothers as well. Progress has been made, resilience is impressive, and yet pastors spoke of deep problems of youth violence, drug abuse, and parents too traumatized to help. We met displaced persons who were focused on reclaiming land rights as they waited in a strange city environment. We also met displaced persons who were focused on improving life for their families in new urban environments. This struggle is ongoing as large scale plantation owners seek new land to cultivate for export crops (banana, plantain, palm oil).

Reflection: Industrialization has been forced upon rural peoples around the world for the past three centuries. Is the situation in Urabá a part of that old, old story? Can land reform achieve peace?

Current information about the area is hard to find. Very little information gets out about the region of Urabá. Reading Spanish helps, but often the source returned in a Google search is Wikipedia with little contemporary back up. When accessing Google maps to get a view of our travels we discovered how little information is available for many parts of Colombia (we travelled on roads that just don’t appear on Google Maps).

Reflection: One of the reasons that peace is hard to achieve is that large parts of Colombia remain an unknown to the rest of the country. The issues that affect the people living in Urabá are unrecognized.

Access to Colombia: Church folks (like us) in the company of local pastors and lay persons have far greater access to conversations and general information than US government officials, aid agencies, or the military. While Anglo tourists in this area may not be safe, we were well cared for. We were given the best each community had to offer. We met only two other ‘foreigners’ during our month in Urabá, and they were the two Presbyterian Young Adult Volunteers from the USA.

Reflection: We can make a difference in helping the outside world understand possibilities and needs of this region.

Worship: Presbyterians in Colombia are very active. Sanctuaries are bright and beautiful. In one community there was a 5:00 am prayer service every weekday. We participated with over 40 people in women’s Bible study (including several men) on a Wednesday night with lots of musical participation. Worship services are two to four hours long. Often on Saturday night as well as Sunday morning, followed by a Sunday night service at a member’s home.

Reflection: The churches are a key source of comfort and community

Education is a key focus for youth: There are six schools in the small town of Curulao. No running water but spotless uniforms. Education is in high demand, but advanced education beyond 11th grade is scarce. Every location had at least one elementary school (often multiples with public and private equally accessible). In the Presbyterian Church we saw a number of after school enrichment programs making a big difference. The school across the street from our base apartment had a beautiful block long mural of the different peoples and cultures of Urabá.

Costs and Construction: A number of congregations were saving for the next project on their list. When we translated the # pesos into $ we were amazed and humbled. A new sanctuary space (with polished terrazzo floors, clean walls and lights) would cost $1,500. A new space for after school programs – $1,500. Recognizing a deficit of protein in children’s diets, one church dreamed of an egg production program (50 chicks and feed for a year $500 with eggs being produced for sale before year end.

Reflection: The actual cost in US dollars to make real improvements in the lives of our Presbyterian brothers and sisters is quite low.

Conditions in general in the Urabá region of Colombia: 21st Century amenities in the midst of 18th Century living accommodations. Many of our host’s homes had televisions and fridges, wifi and cell phones. A game show called The Wall, and a historical drama called “Patricia” were most popular, along with the national news. Western style advertising is prevalent. Many of these same homes lacked running water. Where water was available we always asked ourselves, “Should I brush my teeth with tap water?” Reserve water for showers, to flush toilets and wash clothes in portable washing machines was kept in large plastic garbage cans for the times when none would flow out of the plumbing. Global products like Crest, Dove, Coke and other name brand products were available in the many small corner stores in every dusty town right along with small and large bags of pure water.

Reflection: Clean water is a precious resource, not to be taken for granted. Globalization is reaching the remotest corners of the area. The cost of purified water was well above what many could afford.

Poverty and wealth side by side: We saw pet supply stores in Apartadó, along with a yoga studio and a sex supply boutique side by side in a small mall. A large mall exists outside the city. Restaurants and modern buildings sit next to grimy blocks of small work shops. We visited several displaced church members who live in extreme poverty in shacks on the edge of town.

Reflection: Apartadó is not a sleepy town; change is constant! The church is a vital connection for helping people cope – providing community, children’s programs, education as well as faith and hope.

Diversity of vehicles, humans and animals on roads:
During a short period of people-watching from the ‘porch’ of our host’s home, which sat next to a small urban dirt road we saw a road busy with:

Motorcycles, bicycles, trucks and cars and pedestrians.
A rider-less horse trotting past, lead rope dragging in the dirt. He was closely followed by a boy on a bicycle who carried a thin stick as a prod never used on their way to the barn.
Then a man with a large pink pig – which he tried to steer with a rope and a stick. The hog left a pile of ‘popo’ in the dust in front of us, which we then warned passing pedestrians about.
A large SUV was parked down the street, which we were informed was owned by a FARC member who was visiting his brother.
There was lots of heavy traffic, motorcycles and bicycles with two or three riders, heavy trucks, horse and cart, just outside our apartment door in Apartadó. Sleep was a challenge with early morning loud bus and truck departures for banana plantations and late evening shoppers returning home. Living in the city is safer than living in worker housing on the plantations where workers have been killed.

Reflection: Change is happening very quickly as people adjust to the city and make a living any way they can.