This Accompanier Report was written by Jeff Hornbeck. Jeff and Stephen Minnema are Accompaniers in Urabá in March 2019.

In the small pueblo of Carepa, Colombia, there is a small Presbyterian Church, led by a small Pastora, who has an expansive heart for ministry and survival. Her ongoing inspiration was incapsulated in one line from a hymn in Sunday’s service repeated over and over again: El Espíritu Mueve en Este Lugar. La Pastora’s life embodies this reality as she moves seamlessly between church and family.

The congregation responded to la Pastora’s lead with great enthusiasm. And why not. She was unquestionably in charge as minister, liturgist, choir director, preacher and Pastora all in one. So Spirit and music melded into one, as did we with the congregation, led by unreserved sense of hope. But on the surface, her story and that of the congregation might seem an unlikely path to hope.

Community, faith and solidarity emerge from trust that comes about from intentional

engagement, initiated by la Pastora’s invitation for us to spend five days in her house. This was no doubt an adjustment for all. We took over one of three bedrooms intended to sleep eight people, now ten with us, and shared a single bathroom and small living space. It would be easy to step all over each other.

But sharing came naturally and the front porch became our place of gathering. It provided space in more ways than one. There, at least for me as a mandolinist and choir member, Sunday’s hymns flowed effortlessly into discussions of music, sharing religious and cultural connections and insights. Generosity of heart, trust and laughter ruled a night of sharing between la Pastora’s family of music students and us. We traded the ukulele and online examples of our respective regional musical specialities, Bluegrass met Bambuco, mandolin met bandola.

Sharing leads to trust and trust inevitably leads to truth. The next day, she gathered us together and music gave way to deeper truth. As she carefully relayed to us, the truth is that many in the Presbyterian congregation, including la Pastora and her family, are displaced persons from paramilitary violence, she forced off their modest finca in the late 1990s after the murder of family and friends. The truth is that the fear of resurgent violence cannot be shed. The truth is most people are afraid to talk about it. And the truth is that the PPF Colombia Accompaniment Program is one way to help escape the silence that fear wants to impose. 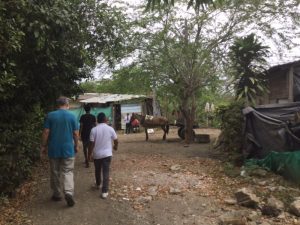 That is all that is asked of us. Don’t let fear, intimidation and most importantly silence reign. Remain in solidarity built on personal trust. The trust that led to la Pasrora’s sharing of her story was built on the spirit moving through music and conversation, and as we concluded an afternoon’s deep sharing, we sang a few bars of “El Espíritu mueve en este lugar.”