The tumult of political news in the US can obscure the ways that changing policy is actually impacting people’s day to day lives, but policy changes have real consequences for real people. Every person waiting in la línea at the Port of Entry in Agua Prieta is enduring the harsh reality of current and ever-changing immigration policy every hour of every day that they continue to wait to be allowed to petition for asylum. 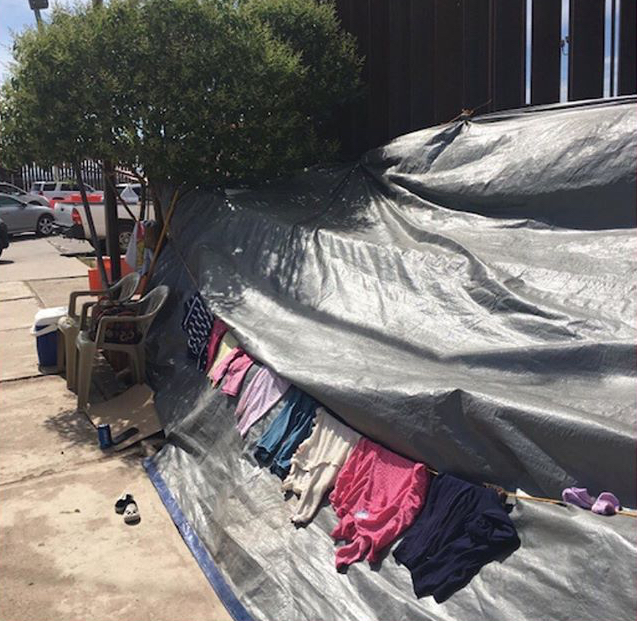 “The line” — space just to the east of the Port of Entry in Agua Prieta, where people are waiting for their numbers to be called from “the list” so that they can cross into the U.S. and present themselves to Customs and Border Protection to petition for asylum.

We have witnessed that asylum seekers continue to be forced to wait for months and months before they are permitted to present themselves at the Port of Entry. Recent accompaniers Doug and Cheryl saw only 11 people in 2.5 weeks allowed to enter the Port to begin the asylum process . If no one is permitted to cross this week, it will have been two entire weeks since anyone has been permitted to petition for asylum at the Agua Prieta Port of Entry.

Meanwhile, migrant folks recently arriving from Cuba have shared that they came to Agua Prieta because they had heard that it’s the fastest and easiest crossing for asylum seekers. If that is true – or if that is the information being shared among communities and people arriving to petition for asylum, we wonder what it might mean: will many more people arrive to Agua Prieta in the coming months? What might it mean for the community and our partners if US policies continue to place such an extreme limit on the number of people permitted to cross? CAME and the Migrant Resource Center have responded to the impacts of US policy on immigration and the migrant population in  Agua Prieta for many years, and we know they will face whatever changes might continue to unfold with ongoing hospitality and compassion.

There have been recent instances of tragic violence in the region, including a shootout between rival cartels in Agua Prieta and a violent attack on women and children who were traveling in suburbans near the border of the states of Chihuahua and Sonora, in what is believed to be a case of mistaken identity in which the women and children were believed to be members of a rival cartel. We join our partners in expressing deep sadness and concern for the violence and the loss of life, and ongoing commitment to following the lead of our partners, who stay attentive to the situation and continue their work for justice and peace for everyone in the border community.

← Despite recent setback, we hope and work for peace in Colombia with our partners
→ Laughter is Golden – Agua Prieta accompanier report