International Solidarity is a Necessity

This post was written by delegate Courtney Hemmelgarn from Kettering, Ohio.

Before I get into this reflection, I want to clarify some vocabulary. Campesinos are farmers. Displaced means moved or removed from property or land, either by force or necessity of war, persecution, safety, or other reason.

In the Colegio American (A mission of the Prebiterio de la Costa) this morning, we engaged in a conversation about the process of peace in Colombia. In attendance were: a man who is an ex-combatant of the FARC, three members of a campesino organization whose acronym is ASPROMAS, members of DiPaz which is a interfaith organization which is striving for peace in Colombia, PAZOS which gains its name from “Paz” meaning peace, and “Pasos” meaning steps, steps to peace, and members of the presbytery and the Universidad Reformada (also a mission of la Iglesía Presbiteriana de la Costa, and the school where Gabriel Garcia Marquez wanted to go to learn English, but his mother wouldn’t let him because the school is Protestant, and his family was catholic.) 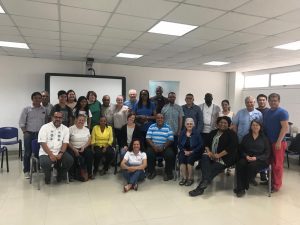 The Delegates, members of the Presbytery leadership, and others in Barranquilla

The day began with a quote in Spanish. “We are in a moment of crisis in which the winds of war can produce devastating fires, deepening the social and environmental exclusion, the multiplication of violent deaths, corruption and diverse types of crimes in our territory.” This quote is from a letter written to Pope Francis, that will be given to him before the government visits with him. The letter urges the Pope to insist on peace in Colombia and asks Colombian President Duque (a Catholic) to do all he can to support peace.

The presbytery started a seed project with the campesino organization, and helped them put in a well. The campesinos don’t receive any aid from the government.  The ex-combatant who joined us today was present in Cuba when the Peace Accord negotiations were happening. 6 million people have been displaced in Colombia. The lack of roads reduced the viability of campesinos to take crops to market to sell, so there began a substitution of illicit drugs. The government has been forcibly removing the illicit crops, leaving the campesinos in a bad spot. Within the Peace Agreements, it was agreed to that the Government would pay the campesinos approximately just under $250 a month as part of their 90% of minimum-wage for campesinos. Approximately 300 to 400 people have received these promised funds, but of the 14,000 Ex-combatants within the community that is a very minute number. This man reiterated that they don’t want to have to move into the city, they want to be able to work as farmers which is who they are. He mentioned that the UN is involved in the process but aren’t pressuring the government enough to make a difference. And recently the dialogue with the ELN has stopped.

Well the peace accords have seen some benefits like hospital wards being able to close since they are seeing as many wounded soldiers and there is less violence, there are still many pieces of the peace accords that are flawed. Many of the spaces that were filled by the FARC that are now disarmed have been taken over by paramilitary groups.

The people we spoke with today overwhelmingly believe that in order to have peace there need to be conversations between the government and the people and that they enter the dialogue between the ELN and the government will not be a good thing. It also doesn’t help that the current government is saying that they weren’t the ones who signed the peace accords the last government was, so seemingly there’s an idea that they don’t have to uphold it.  There is also the idea among the citizens that the government thinks that war gets them more public approval than peace. When someone mentioned that the people don’t vote on that which they are not educated on, it became obvious that there is a need for better public education. Someone brought up the point that it’s near to impossible for the people to agree to a 300 page document like the Peace Accords.

The bombing in Bogotá at a police station that left 21 dead, about two weeks ago was brought up, and how if the police can’t protect themselves, what hope do the people in rural areas have?

One of the first things one of the campesinos said was that land is the “black gold” in Colombia. The wealthiest control the majority of the land. The young woman with the campesinos, who I later found out is only a year older than me, said that the campesinos just want support. As she was brought to tears, she said that campesinos are looked down on, and they just want to move forward. (I later had the incredible experience of her giving me a bracelet that the women of the church made.)

We began to talk about the power struggle and some of the organized resistance happening. Apparently a student movement pressured the government enough to see some change within education.  Someone mentioned that it almost always feels like the government has the upper hand.  Another person remarked that it is because they have the media on their side to distract them, and make them think things are hopeless.

International pressure is a necessity for the effectiveness of peace in Colombia. Pressures on the government need to be felt from all angles. There need to be channels built for political advocacy. Many organizations have left Colombia because they no longer see the need, but there is still a great need.

As we heard all of these points, I couldn’t help but remember all the activist, human rights defenders assassinated in Colombia. These people are so brave to be meeting, and brave to be continuing to fight for justice within their country.  It was simply amazing to be at the tables with them, in accompianment.

email
← Back to the Promised Land
→ Restitution