It Really Is All About Land: First Days in Colombia

This post was written by Courtney Hemmelgarn, delegate from Kettering, Ohio.

Our first night we visited the town of Caracolón, which consists of displaced citizens.  Displaced hardly seems like a harsh enough word for their situation, when in reality, caught between two armed groups, an armed group entered their community, massacred 400 of their family and community members, burned their houses, and left many orphans and widows.  They then went to Dabeiba, where they were in shelters, accompanied by the nuns of the town, and for four years agitated the government until they provided land for them.

21 years after their displacement, they still live on the government provided land, where on very steep mountain sides, they farm the land. About 140 live in the community, and though they try to sustain themselves, it isn’t easy and there is very little room for growth. They face the land not providing enough for the community, but they are farmers, and don’t see opportunity in the city. 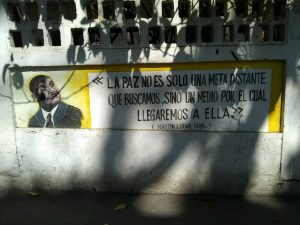 When they have tried to return to their land, the government has told them there are land mines. The government doesn’t, however see what goes on in their community. The water isn’t adequate for drinking, and the water they have is barely enough, again, leaving little room for growth. Many natural water supplies have run dry. Having grown organically on their home land, they tried that method on the land they are on now, but that didn’t produce enough for the community so they have to use chemicals to produce enough.  They used to fish and hunt, but they aren’t able to anymore, so they are reliant on going into town.  In their remote location, no school has been provided. They don’t want a different lifestyle, just a different land.

This all was told to us by a leader in the community who was seven when her village was massacred, and other community members.  One women said her ultimate dream was to return to their land by the path they left by.

Today we visited Llano Grande, which is a community of ex-FARC Combatants.  As we approached, police quickly sprang into action to meet us, and as part of regular security, searched our bags as we got off the bus. All this while the police held large guns.

We met with community members there and ate lunch there as well.  When these ex-combatants entered into the peace accords with the government, they agreed to give up their arms, and promised not to take up arms again, As well as give up all of their goods, including money.  In turn, the government would provide housing and a reintegration program, as well as a stipend that equalled 90% of the minimum wage.

They still haven’t received the 90% minimum wage. The police are there to protect the community, and the community has good relations with the police.  In August, the land will no longer be available to the community, and without the funds promised from the government, they have no way to buy land.  They don’t want to change their lifestyle–they’re campesinos–, but they cannot farm like they used to if they do not have land.  One of the leaders was a member of the FARC for 34 years, joining when she was 14.  Recently she tried to attend a meeting of disarmed groups in San Salvador, but was detained, and accused of fleeing the country. She told us that without childcare, the women aren’t able to work or study. 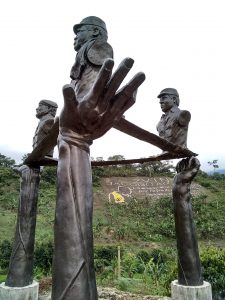 A statue to some of the fallen comapñeros at Llano Grande.

It hasn’t worked well as a reintegration place, since they don’t really interact with the public, and the land isn’t good for farming. FARC has become a political party, with a new acronym, Revolutionary Alternative Force for the Common good. That being said, with the current climate in Colombia, it is dangerous to announce oneself as a political candidate for fear of assassination.  She insisted that they don’t want a handout, they just want to be able to farm and receive what the government promised them. They have become distrustful of others because of the government and the groups that come to visit them, like the UN who have done nothing for them.  Through all of this, however, she said that they are committed to their word and not taking up arms again. 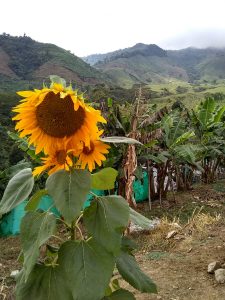 The community at Llano Grande has planted food and flowers and raises animals, although they’re not sure what will happen after August, when the government support that pays for the land they’re on ends.

← Hope for Land Reform, but It Hasn’t Happened Yet
→ Many Groups, a Shared Dream