Let’s Show Trump What It Means to Be a Presbyterian 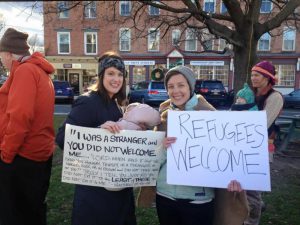 Leaders and pastors of our denomination rightly wrote prophetic and pastoral public letters to then-presidential-nominee Trump [1], and later to President-elect Trump [2] explaining why and how Trump’s espoused values are at odds with the Presbyterianism he claims. And they were right. Our professed beliefs and policies express a commitment to justice in the form of immigrant, racial justice, LGBTQ, and creation justice, women’s reproductive rights, and temperance of power.

So why did Trump so quickly claim a home in the Presbyterian community if our beliefs and policies are so at odds with his own? Perhaps because we are one of the wealthiest religious groups in the country measured by household income [3]. Whether he knows that or not (I’d guess not), the perception and culture of the PC(USA) is one of formal education and wealth. We are also over 90% white. There are incredibly faithful, courageous, and beloved people and communities of color that make up and shape our denomination, and the PC(USA) would be empty without them. However, as a denomination, we remain a culturally white institution, meaning we are shaped by and perpetuate the values of white supremacy in addition to Gospel values. I wonder if that made Trump comfortable calling himself a Presbyterian.

Or I wonder if it’s because when he has been in Presbyterian communities and services his own misogynist, capitalistic, racist, ablest, anti-Semitic, and Islamophobic, have not been adequately challenged. I know that they sometimes those values been challenged and that he has heard the Gospel preached in a Presbyterian Church, but if it’s rare enough that he can ignore it or write it off, the Presbyterian Church has not adequately preached the Gospel consistently and courageously and boldly enough.

I also don’t think that Trump claims Presbyterianism as his religion simply because he’s relying on a theology of God’s unending grace that tells us that even people as despicable and un-Christ-like as Donald J. Trump are worthy of God’s love and therefore worthy of being part of the Church. That is a central part of who we understand ourselves to be, but being a part of the Presbyterian faith community also calls us to be held accountable for our actions by that community.

More importantly than speculating about Trump’s experiences and thoughts about Presbyterianism, I believe that he shouldn’t even have to go to church on a Sunday morning (in fact, no one should) to know that Presbyterians are committed to justice and peacemaking in the world. It should be obvious because we are in the streets and calling our representatives and rooted in our communities that are models of justice-seeking and peace-making communities. I believe that if Trump looked more closely he would see that Presbyterianism is at odds with his beliefs and proposed policies. But it’s clear that he hasn’t yet, so let’s be such faithful Presbyterians that he—and everyone else—sees our commitments and our policies of Gospel and social justice lived out.

There are plenty of Presbyterians and Presbyterian communities already doing this work. More Light Presbyterians held a series of virtual teach-ins on racism and white supremacy over the last few weeks [4]. PPF is working with the Synod of the Northeast to train more people and congregations to be able to offer sanctuary to undocumented immigrants, Muslims and other communities that might come further under attack than they already have been [5]. Thousands of Presbyterians will be marching in the Women’s March on Saturday. There are Peace Communities all over the US made up of Presbyterians and others who live together, committed to living lives of Gospel values both publicly and by taking care of one another. Our stated clerk, J Herbert Nelson, wrote a wonderful piece about long-term policy work to which Presbyterians should be devoted in this next administration [6].

I was as embarrassed and angry as anyone else that a man like Trump was claiming my faith community as his own—a faith community that has challenged me to be more loving, more courageous, more justice-seeking, more open, more hospitable. But after the initial embarrassment in the form of indignation wore off, I realized I was not so surprised, because I have also seen the Church enact the Empire-values that Trump embodies. So instead of trying to prove all the ways that Trump is not true to Presbyterian values, let’s commit to live our Presbyterian values so boldly and so publicly that he won’t be able to claim Presbyterianism without changing himself or being disbelieved.

← Sanctuary and Accompaniment in New York State
→ I March For Myself