Yesterday, a delegation of PPFers gathered with about 500 people of faith gathered in El Paso, Texas to participate in a Moral Monday at the Borderlands. There were dozens of Presbyterians participating in the action with 500 other people of faith, including groups from Southside Presbyterian Church in Tucson, AZ, First Presbyterian Church of Santa Fe, Mission Presbytery in Texas, and many more! This reflection is written by PPF Activist Council member Angela Williams (Austin, TX). 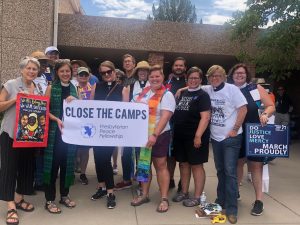 We showed up to the Customs and Border Patrol Station in El Paso where ICE processes people we call holy and our government calls illegal. We came from north and south and east and west to gather around an intercom speaker together. They tried to divide us. They tried to threaten us so we might not show up. But show up we did. We stayed and marched and sang and prayed and blessed and sanctified the ground on which this center stands even when they refused our pastoral visit. We committed to keep doing this work, to keep showing up. We followed the lead of local organizations doing this work every day. That’s solidarity at work. As Rev. Dr. William Barber said, we were not arrested but we arrested the attention of the nation. When hundreds of faith leaders march to your front door, you might feel like the threat level is elevated. Honestly, you should. We bring our bodies and carry with us clouds of witnesses from movements gone by, folks at home, and, not to mention, the power of the Divine. 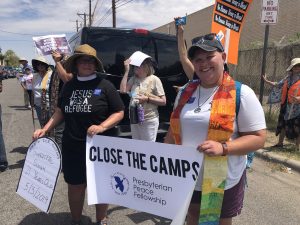 I felt the Spirit moving more through my heart, mind, soul, and strength yesterday than I have in a long while. I spent much time and energy discerning my willingness to risk arrest at this direct action. I prayed and meditated on it. I talked to my closest family members, those to whom I am accountable. I spoke with the group of faithful people with whom I traveled to El Paso. We discerned as a community gathered for Moral Monday at the Borderlands. I realized that my heart and body wanted to risk arrest, but my traveling group was leaving after the action. I resigned myself to not risking arrest, but it did not sit well with me. I felt a pit in my stomach. My heart raced as I tried to process these emotions, to make meaning of this new reality. As theomusicologist, Yara Allen led us, we sang “They’re caging up children, that’s a shame. Look at all the people they’ve denied,” tears pricked my eyes and then freely flowed down my face. My body needed to release some of this tension she was carrying. 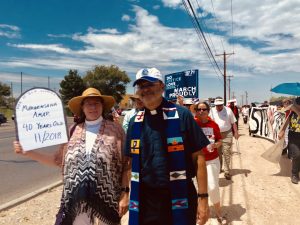 Activist Council members Revs. Susan Quass and Roger Powers (from Albuquerque, NM) were among those marching for an end to child detention.

When Rev. Dr. William Barber began speaking, we listened, ready to embrace the movement’s agenda, to follow the lead of El Paso leaders, and not to keep holding on to our personal agendas. No one would be arrested. We would stick together. One body. One movement. One march. One group committed to justice. My body relaxed and all the regret and guilt I had been feeling melted away, as the Spirit created more space for me to be present for the rest of the direct action.

These concentration camps must close now. We must end family separation and putting children into cages. We must care for the migrant, the widow, the orphan, the stranger. Our souls depend on it. Our liberation depends on it. The moral center of this country depends on it.

More about the action organized by the Poor People’s Campaign and Repairers of the Breach in cooperation with Border Network for Human Rights: 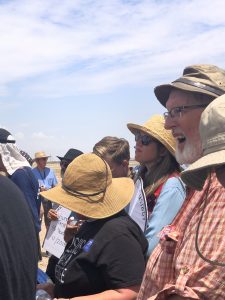 Activist Council member Jenn Soule-Hill came with others from Southside Presbyterian Church in Tucson to protest the concentration camps where the US government is holding migrants, including children

imprisoning children and adults who come to the US simply seeking safety. A letter was delivered to congressional leadership and signed by over 2,000 people of faith demanding an end to the abysmal conditions of migrants in detention, based on scripture and the constitution. When no change happened, we gathered outside the Clint Texas Detention Center in El Paso. These were and continue to be our demands:

Several news outlets covered the action, including this excellent article by the El Paso Times and this segment on MSNBC’s Morning Joe.