Today marks the 70th anniversary of the Nakba, the Catastrophe, when Israel occupied Palestine in 1948 displacing at least 750,000 Palestinians from their homes. Yesterday also marks the move of the US Embassy from Tel Aviv to Jerusalem and the deadliest day in Gaza since the War on Gaza in 2014.

Monday we awoke to news and photos of at least 37 Palestinians killed in Gaza, shot by the Israeli military, juxtaposed with news and photos of the Trump family and administration gathered to celebrate the move of the US embassy from Tel Aviv to Jerusalem. As the day went on, 37 turned to 50 or more dead in Gaza, many shot by Israeli snipers, several who were children. No Israelis have been killed.

Since the Great Return Marches began on March 30, Israeli soldiers have killed over 100 Gazans and injured over 10,000, often shooting them in the legs to intentionally main them (this was also something we learned that the IDF does in the Deheishe Refugee Camp when we visited in July 2017). March 30 is Land Day in Palestine, a day that commemorates 6 Palestinians who were killed by Israeli police 42 years ago for defending their land. Land Day not only commemorates those killed, but continues to be a day of resistance to the colonization and occupation of Palestine by Israel. Every Friday sinch March 30, 2018, Gazans have been holding Great Return Marches, challenging the wall that holds them prisoner and culminating today, on the 70th anniversary of the Nakba.

This year, March 30 also feel on the Christian day of Good Friday, the day we remember as Jesus’ crucifixion. That Friday morning, Palestinian (and allies’) social media was filled with images of the nonviolent demonstration happening in Gaza and the news of the 500 injured and the 8 killed by that morning. And those Good Friday words— “My God, my God, why have you forsaken me?”—echoing in our liturgies and through the photos and reports of violence against Gazans. 2000 years later, Palestinians continue to be crucified by an occupying military that responds to nonviolent resistance to oppression with more repression and incredible violence.

Christians continue in the Season of Easter until this Sunday when we celebrate Pentecost. This has been a challenging season to continue to look for resurrection among us, when the beginning of Holy Week and this season of Easter was marked by the beginning of the Great Return Marches that have been so tragically violent. And yet these nonviolent protests have also perhaps helped break into the mainstream media cycle in the United States that typically portrays Palestinians as violent. Media continues to try and give a “balanced” view of current events in Palestine and Israel and, in so doing, often actually gives an incredibly imbalanced report of what is happening. But the numbers don’t lie: 50 Gazans killed on May 14 alone and not one Israeli, while just an hour’s drive away, the US embassy moved to Jerusalem, emphasizing the US’s support for Israel’s claim to the city that is the capital of Palestine.

Gazans have come together under the flag of Palestine–not of any political party–to nonviolently and boldly challenge the occupation, demanding the right of return to their homes (that is also called for by the United Nations). Their steadfastness is working: Israel’s brutality is not going ignored, and it cannot last forever. If resurrection is a cry for life amid death and a resistance to the destruction and devastation of crucifixion, the Great Return Marches are indeed resurrection moments. Will we recognize it before it’s too late? Or will we continue down the road unable to recognize resurrection as it walks and talks beside us? Will we have the courage to stand with Palestinians as they continue to push and shift the world’s narrative about the Occupation as they fight for their lives and their right of return? Will we have the clarity of mind to see the ways that our own tax dollars and US policies continue to support the occupation and ongoing Nakba–modern-day crucifixion to be sure–and follow the Palestinian call for solidarity and action?

Things that we can do right now: 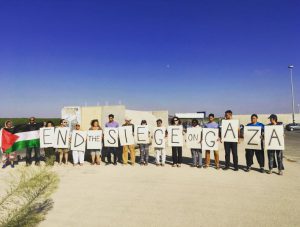