Why Pacifists Need To Join The Riot

This post comes to us from Rev. Aric Clark, PPF Co-Moderator.

Sign up here for PPF’s upcoming Action Circles about defunding the police. 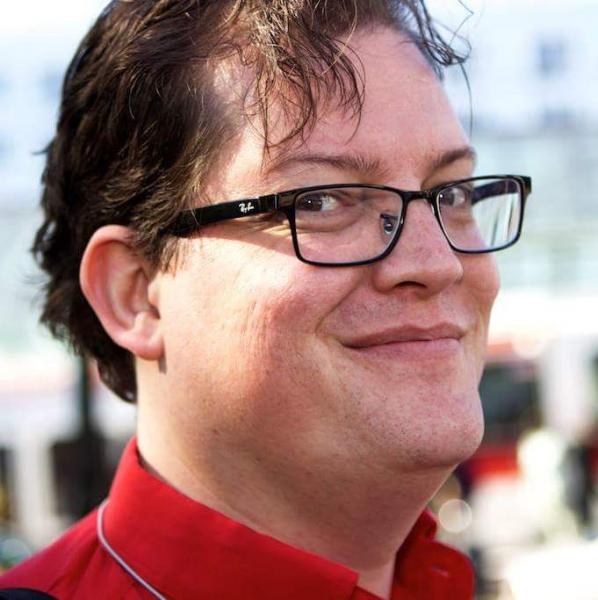 There is an observable and predictable progression many protesters undergo in the Portland Uprising which is now entering its 71st night of continuous resistance. The first time someone shows up they usually arrive in a t-shirt, nothing more than a paper or cloth mask for protection. They often bring signs and stand at the edges of the protest. They hesitate to join in some of the more aggressive chants. If they stay till the tear-gassing starts then the next night they come back they will have leveled up. On night two they will be wearing goggles of some kind, and have more of their skin covered. They will probably have discarded the sign and they will chant with vehemence. On night three they will have added a helmet, and perhaps a respirator. After enough nights of this you’ll see the same person with full body armor and a gas mask and perhaps wielding a defensive tool like a plastic shield, an umbrella, or a leaf-blower.

The consistent focus of the uprising has been on justice for black lives and defunding the police, but one of the strategies of the state has been to try to divide the protesters by forwarding a narrative of “good protester vs. bad protester”. You see this all over, from Trump saying these aren’t “regular protesters” they’re “violent anarchists”, to the feds insisting they have no choice, but to indiscriminately deploy crowd control agents because a few protesters shake a fence, or throw trash. The goal of this strategy is to get protesters to waste energy arguing tactics and self-policing. The goal is to fracture the movement and provide cover for the state’s outrageous use of violence. And it’s working. 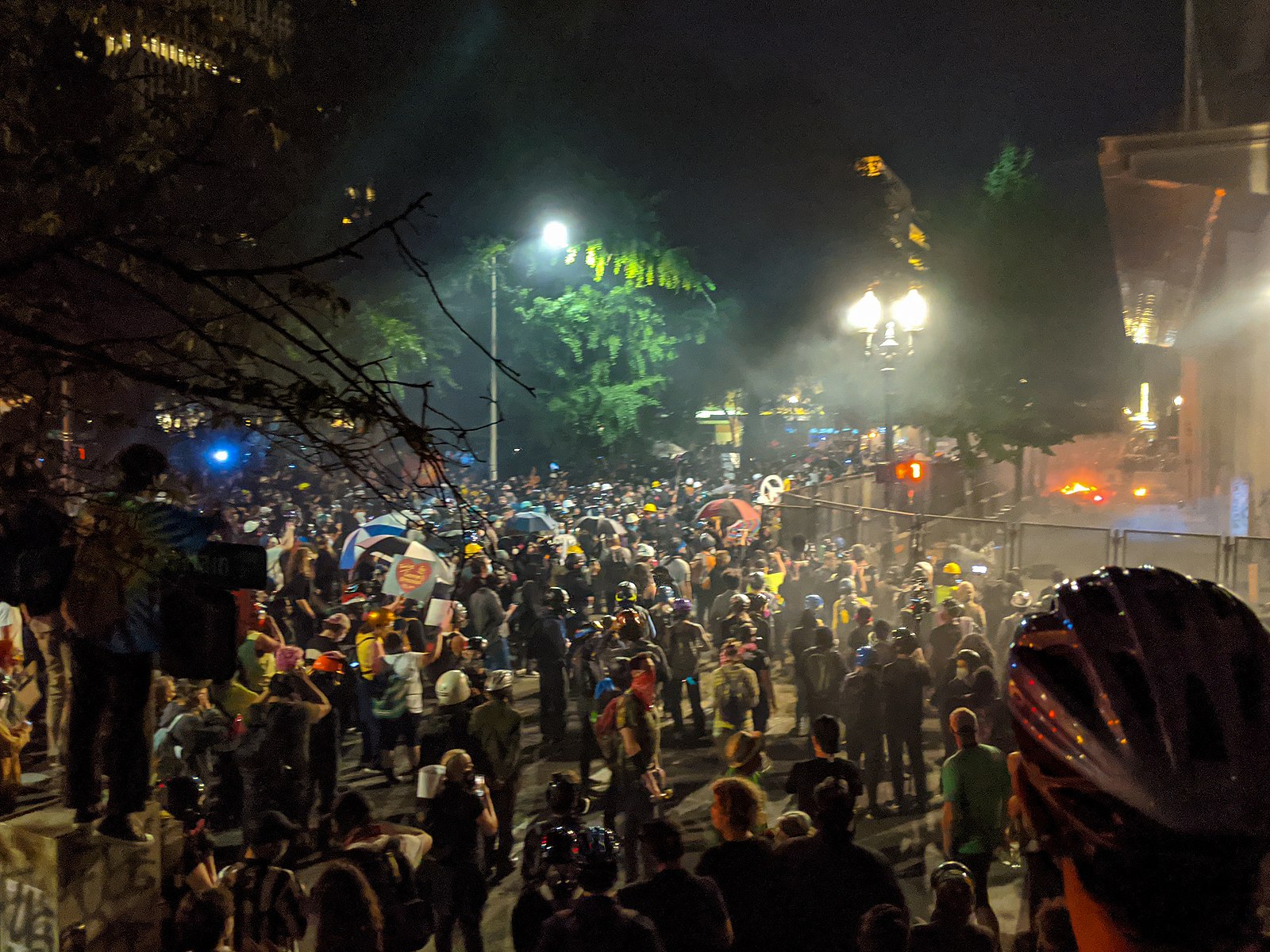 Last night in downtown Portland a large group of protesters with megaphones spent the entire night not directing their energy at the police, but chastising their fellow protesters, insisting that the protest remain a “peaceful” protest. Since the beginning of this present uprising there have been wide differences among the protesters. There is no central organizing structure. Instead there are many overlapping, sometimes supportive, and sometimes competing structures. Similar to movements like Occupy this decentralized structure is both an advantage and a disadvantage. Consensus on how to proceed does not exist. Different groups have the trust of different segments of the community and some groups are suspected of either having been infiltrated by the police or even of openly cooperating with the police.

Faith-based groups are often unhelpful to this dynamic, exacerbating the false good protester/bad protester divide. I organize with an interfaith group of clergy trying to maintain a presence at the protests and build trust for movement chaplaincy work, which means caring for the physical, emotional, and spiritual well-being of protesters and holding space through ritual and presence that ground the work and build resilience against trauma. Right now there are organizations we have partnered with in the past that we cannot work with because they have chosen to spend their resources criticizing the uprising and demanding it live up to standards of respectability and nonviolence that the protesters never agreed to. I have heard these clergy say that protests that fail to be entirely peaceful are mere spectacle, a game for immature children, and not a serious attempt at social transformation. For this reason, there is little trust of clergy among the protesters. We are seen as defenders of the status quo who claim to want justice, but only if we can get it by asking nicely.

So here I am, a Christian minister and a lifelong pacifist, co-moderator of the Presbyterian Peace Fellowship which has been insisting that nonviolence works for over 75 years, pleading with my fellow pacifists: it’s time to join the riot. I say this, not as a divergence from my commitment to nonviolence, but out of a deep desire to remain faithful and based on the sharpest analysis I can muster. In the middle of the uprising is the right place for us to be, and I will lay out my reasons.

A vision of nonviolence that narrows its focus to the actions of individuals and misses the systemic violence which surrounds and informs all our actions is not only tragically shortsighted, but actually reinforces the violent status quo by making us driven toward a selfish conception of personal purity. We cannot be so concerned about avoiding the appearance of participating in violence by supporting a protest that includes property destruction or defensive uses of force that we fail to do everything in our power to stop the extreme ongoing violence of the state against black people. We must remember to continually apply a power-dynamics analysis to all our actions. A protester throwing trash at police in body armor is not the same as police deploying tear gas night after night against civilians. These things are even less proportional when it happens in the context of a society where police kill over a 1,000 people a year, and where countless racist policies have continually leveraged the violence of the state against black people for over 400 years.

If we want to move toward a world free from the specter of violence we must work to dismantle the greatest purveyors of violence in our world: nation states, militaries, and the police. A commitment to nonviolence is inherently a commitment to revolution. To put that another way, we mustn’t struggle to abolish violence within our hearts, but fail to be abolitionists in the street. We cannot claim to be pacifists if our pacifism rests on the privilege of outsourcing our violence to agents of the state. We are not pacifists if the peace we are envisioning is a Pax Romana Remix, where tranquility and order in middle-class white neighborhoods is sustained by constant imperialism overseas and constant policing in poor and black and brown neighborhoods at home.

Power concedes nothing without a demand. No one should imagine that we are getting out of this morass of late-stage capitalism, and white-supremacist settler-colonialism without massive use of violence in defense of the power structure. By now it should be clear that the violence of the police against the Ferguson Uprising, and Occupy, and Standing Rock, and the George Floyd Uprisings isn’t anomalous and it is only going to get worse before it gets better. Therefore to prepare for a world without violence means in-part preparing to endure a storm of ultra-violence. We’ve got to stop longing for protests that look like a Pepsi commercial where cops and protesters dance together over a refreshing sugary beverage. We need protests that successfully provoke the police to violence in order to undermine the moral authority of the state, and we need protests that successfully endure against that violence in order to teach the community vital tools of community care and mutual aid.

One of the greatest strengths of nonviolence in organizing is creativity, but for years I have attended candlelight vigils and marches and rallies that have had no effect on public policy and accomplished nothing toward making our world either more just or more peaceful. These spaces rarely show much evidence of innovative thinking. By contrast, when I was in Palestine in 2014 I was astounded by the endurance and creativity of organizers there who were accustomed to being slandered as violent terrorists, and who refused to condemn kids throwing rocks at tanks, wisely keeping their focus on the unjust occupation. Similarly at Standing Rock there was a diversity of tactics. Some people were engaged in torching police vehicles while others tried to hold a prayerful pose, and in this tension the creativity of the camps was flourishing. Now in Portland a new tactic is being discovered every night, from leaf blowers, to dance parties, to laser pointers, to balloons filled with paint. The creative energy of nonviolence is stagnant when it relies upon the approval of the violent apparatus of the state, but that creativity is unleashed when it is properly positioned as an enemy of the power structure.

There is a world where no one is afraid, no one is oppressed, and everyone has enough of what they need to live a dignified life. It’s a raucous dance party. It’s a riotous feast. And if you peer through the clouds of tear gas on the streets of Portland these days, you can just about see it.

← Joint Interfaith Statement on the 75th Anniversary of the Atomic Bombings of Hiroshima and Nagasaki
→ Barstow-Driver 2020: Honoring Linda Eastwood