Since the election things have been quite busy for us at New Sanctuary for Immigrants. We’ve been blessed with many new members who want to get involved with the work of defending and strengthening immigrant rights. Post-Election we have been able to form working groups and organize to make Albany a Sanctuary City, Albany County a Sanctuary County, and to stop the County Sheriff from detaining immigrants at the County jail. Parallel to our work, there has been mobilization at the state universities (SUNY) to declare Sanctuary Campus. Faith communities are learning more deeply what it will mean to be a Sanctuary congregation and defend our immigrant neighbors from deportation.

In New York, a comparatively progressive state, there is a lot of ‘fog’ and confusion about immigration. “Sanctuary City” has no specific legal definition, and can include a variety of policies, or sometimes simply public statements, about immigrant rights. There is much public education, as well as educating of elected leaders, to be done. All the while, the larger conversation on immigrant rights, even in supportive circles, too often falls back on the idea of ‘good’ vs ‘bad’ immigrants, let alone the outright hostility that remains widespread. Much of our work involves changing the public conversation – that this is not an ‘issue,’ these are people, our neighbors, our co-workers, our community. On December 19th, New Sanctuary held a ‘teach-in’ at Albany City Hall, to educate the community about immigrant rights and give public testimony in support of a Common Council resolution that, among other things, affirmed Albany’s defense of immigrant rights. It’s an important first step. You can see some press coverage here and here. 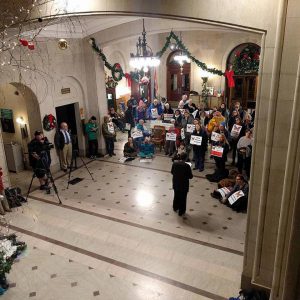 We’ve continued the work of walking along side our immigrant sisters and brothers on their journey. Recently, a member of our community had to appear in immigration court in Buffalo, New York, which is five hours by car from Albany – difficult for someone to get to without a car. In New York State there are only two locations for Immigration Court, Buffalo and New York City (which are on complete opposite ends of the state). Many immigrants living in Albany must appear in the Buffalo Immigration court. Our friend had to appear in court at 9 in the morning. This was her first appearance in Immigration Court and she feared going to an unknown city to face the harsh immigration system alone. New Sanctuary was able to find lodging the night before for our immigrant sister and her husband with the Sisters of St. Joseph in Clarence, NY, which is about 30 minutes outside Buffalo. We were able to provide transportation and emotional support to her in this very stressful time.

While we work to change laws locally and nationwide we also walk on the journey with our Immigrant sisters and brothers, sharing joyful and heartbreaking experiences, sharing ups and downs and always moving forward. Adelante.

email
← No Tears: A Lament for Aleppo
→ Let’s Show Trump What It Means to Be a Presbyterian